War is hell, there’s no doubt about it, and the further away we get from days like today in history the more we will forget. For it is in our nature regardless of books, movies, and stories to do so for eventually our graves, go unkept. I used to be a warrior shrouded in the esprit de corps of the esteemed 101st airborne, and I will ensure that the memories of the fallen both in my lifetime and before are remembered.

As my son and daughters grow up, I will teach them so that they have a thorough respect for the memory of days like today and how it impacted both WW2 and generations of Americans. The more years that pass from wars of the past will only ensure or encourage their repetition. In a world so divided as it is today it is not far fetched for another long conventional war. The start of the Great War was because of a profound dedication to Nationalism. The beginning of WW2 was because of Fascism with a similar smattering of Nationalism. If we get to a point where we are on the tipping point of any significant movement, it is not unbelievable to have a fringe group push one side into the other. Countries like Iran or North Korea are the most likely for this to occur just based on their infrastructure, size of their militaries, and corrupt ideals. Venezuela, Turkey, and Syria are more like to increase the terror on their own people and not to other countries. Russia and China often behave quite contradictory to the countries of the West but know that it would be imprudent to cause any long term damage in the form of war. They much prefer ghost tactics, stealing technology, or slowly creeping into the territory of their neighbors.

History is probably one of the lesser studied classes in modern times, and I am only blessed to care about it because of my time in the military and private study. The memories of those who lived through or even died on D-Day need to live forever in the minds of the common folk as well as in those of our leaders so that it is not replicated. For even every post 9/11 generation that comes into being will also forget the impact of that day on the World. Now that radical fringe groups impact our lives much more than at the beginning of the 20th century it gives us more pause to determine our cause and effect strategy of the best path forward to fight the dangers of today.

D-Day plus 27,375 marks a day much different than that fateful day so many years ago. I am slightly ashamed to say that other than the Queen of England whose father was the leader of the UK during the invasion of Operation Overlord, we find ourselves leaderless to a person that genuinely understands war. I would say the same thing really for the last 4 presidents who have served no combat time. Great speeches can always be written and preached no matter the time of day, but really only the great words come from the heart in the moment of great peril. The words to the men by General Eisenhower are the embodiment of all speeches delivered right before a great event.

“Soldiers, Sailors, and Airmen of the Allied Expeditionary Force:

You are about to embark upon the Great Crusade, toward which we have striven these many months.

The eyes of the world are upon you. The hopes and prayers of liberty-loving people everywhere march with you.

In company with our brave Allies and brothers-in-arms on other fronts you will bring about the destruction of the German war machine, the elimination of Nazi tyranny over oppressed peoples of Europe, and security for ourselves in a free world.

Your task will not be an easy one. Your enemy is well trained, well equipped, and battle-hardened. He will fight savagely.

But this is the year 1944. Much has happened since the Nazi triumphs of 1940-41. The United Nations1 have inflicted upon the Germans great defeats, in open battle, man-to-man. Our air offensive has seriously reduced their strength in the air and their capacity to wage war on the ground. Our Home Fronts have given us an overwhelming superiority in weapons and munitions of war, and placed at our disposal great reserves of trained fighting men. The tide has turned. The free men of the world are marching together to victory.

I have full confidence in your courage, devotion to duty, and skill in battle. We will accept nothing less than full victory.

Good Luck! And let us all beseech the blessing of Almighty God upon this great and noble undertaking.”

In fact, all speeches delivered marking the celebration of a day typically hold profound respect by those there and those listening. But what makes the speech of the leaders that speak on D-Day +27,375 all that memorable other than their own given rank? The leaders of today must hold accountable the leaders of tomorrow through their words of guidance and their carrying of the torch for us citizens and our respective rights.

When the doors of our own LCVP’s (D-Day landing craft) open up in our own lives, how do we react? Will we be poised to decimate the enemy or to lambaste the uninitiated? We must do our best to remember the heroes of D-Day while simultaneously replicating their actions in our daily lives as the bastions of freedom that they intended for us to be. As a veteran of one of the most prestigious military units in American history, I understand what it’s like to carry the torch, for I too wore the presidential unit citation on my uniform that the 506th was awarded because of their actions on D-Day. I challenge you to pass on the memories of those brave men on that day to your loved ones so that they are never forgotten. 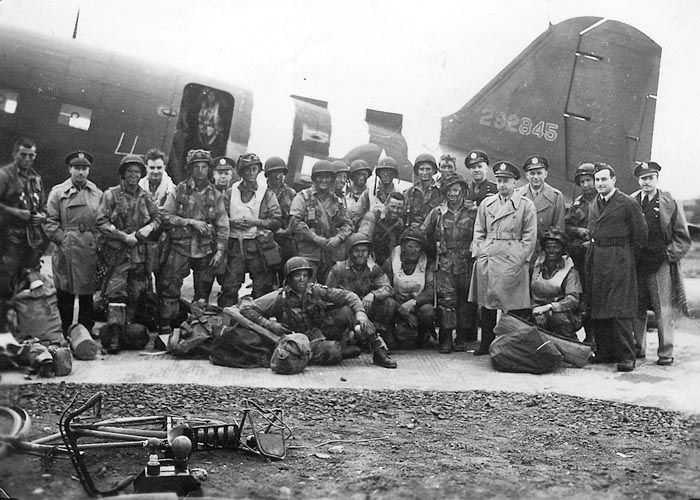